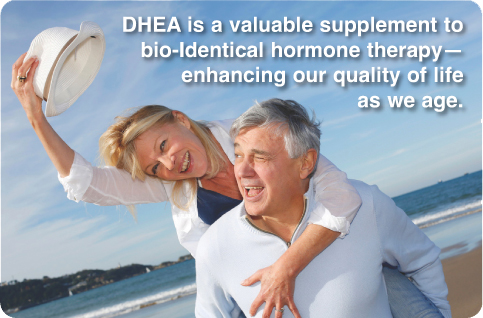 What Is DHEA? It stands for dehydroepiandrosterone and is a hormone produced by your body’s adrenal glands. It functions as a precursor to male and female sex hormones, including testosterone and estrogen. (Precursors are substances that are converted by the body, in this case, into hormones.)

When using DHEA therapeutically and supplementally, quality matters. The only acceptable form of DHEA is micronized (for better absorption) and sustained-release (release over time). I generally use a compounding pharmacy for this, and I add pregnenolone. This ends up being less expensive than using either separately. I also use it in my capsuled hormone formulations, along with Estrogen, Progesterone, and Testosterone.

For a closer look, and to separate DHEA’s hypes from its hopes, I am including here edited excerpts from an article by researchers: Rutkowski, Sowa, Rutkowska-Talipska, and Kuryliszyn-Moskal, from the medical journal, Drugs, 2014, 74 (11):

In animal studies, low levels of DHEA have been associated with age-related involuntary changes, including reduced lifespan. Extrapola-tion of animal data to humans has turned DHEA into a ‘super-hormone’ and an ‘anti-aging’ panacea. It has been aggressively marketed and sold in large quantities as a dietary supplement. Recent double blind, placebo-controlled human studies provided evidence to support some of these claims.

In the elderly, DHEA exerts an immuno-modulatory action, increasing the number of monocytes, T cells expressing T-cell receptor gamma/delta and natural killer cells. In systemic lupus erythematosus, DHEA is steroid-sparing. In an unblinded study, it induced remission in the majority of patients with inflammatory bowel disease. DHEA modulates cardiovascular signalling pathways and exerts an anti-inflammatory, vasorelaxant and anti-remodelling effect.

Its low levels correlate with increased cardiovascular disease and all-cause mortality. DHEA/ DHEAS appear protective in asthma and allergy. Low levels of DHEAS accompany adrenal suppression. It could be used to screen for the side effects of steroids. In women, DHEA improves sexual satisfaction, fertility and age-related vaginal atrophy (used by many of our patients).

Many factors are responsible for the inconsistent/negative results of some studies. Over-reliance on animal models (DHEA is essentially a human molecule), different dosing protocols with non-pharmacological doses often unachievable in humans, rapid metabolism of DHEA, and organ-specific differences render data interpretation difficult.

Nevertheless, a growing body of evidence supports the notion that DHEA is not just an overrated dietary supplement, but is a useful application for some, but not all, human diseases. Large-scale randomized controlled trials are needed to fine-tune the indications and optimal dosing protocols before DHEA enters routine clinical practice.”

It is unlikely that there will be large-scale, randomized, controlled trials, as DHEA is non-patentable, meaning no billions for the pharmaceutical industry. However, I’ve found it to be a valuable supplement in our bio-identical hormone therapies. I look forward to assisting you in exploring life enhancement and proactive anti-aging.