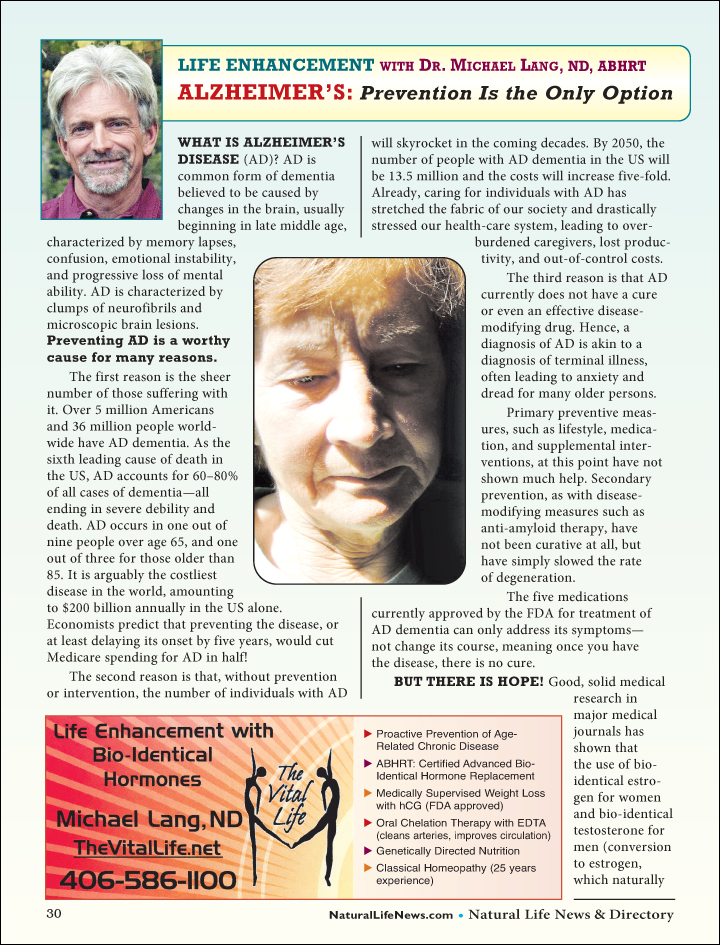 What is Alzheimer’s Disease (AD)? AD is common form of dementia believed to be caused by changes in the brain, usually beginning in late middle age, characterized by memory lapses, confusion, emotional instability, and progressive loss of mental ability. AD is characterized by clumps of neurofibrils and microscopic brain lesions. Preventing AD is a worthy cause for many reasons.

The first reason is the sheer number of those suffering with it. Over 5 million Americans and 36 million people worldwide have AD dementia. As the sixth leading cause of death in the US, AD accounts for 60–80% of all cases of dementia—all ending in severe debility and death. AD occurs in one out of nine people over age 65, and one out of three for those older than 85. It is arguably the costliest disease in the world, amounting to $200 billion annually in the US alone. Economists predict that preventing the disease, or at least delaying its onset by five years, would cut Medicare spending for AD in half!

The second reason is that, without prevention or intervention, the number of individuals with AD will skyrocket in the coming decades. By 2050, the number of people with AD dementia in the US will be 13.5 million and the costs will increase five-fold. Already, caring for individuals with AD has stretched the fabric of our society and drastically stressed our health-care system, leading to over-burdened caregivers, lost productivity, and out-of-control costs.

The third reason is that AD currently does not have a cure or even an effective disease-modifying drug. Hence, a diagnosis of AD is akin to a diagnosis of terminal illness, often leading to anxiety and dread for many older persons.

Primary preventive measures, such as lifestyle, medication, and supplemental interventions, at this point have not shown much help. Secondary prevention, as with disease-modifying measures such as anti-amyloid therapy, have

not been curative at all, but have simply slowed the rate of degeneration.

The five medications currently approved by the FDA for treatment of AD dementia can only address its symptoms—not change its course, meaning once you have the disease, there is no cure.

BUT THERE IS HOPE! Good, solid medical research in major medical journals has shown that the use of bio-identical estrogen for women and bio-identical testosterone for men (conversion to estrogen, which naturally happens) is helpful in preventing AD and sometimes even in treating it!

Data from a succession of animal and human studies provide compelling evidence that estrogen maintains cognitive function. AD is five times more prevalent among postmenopausal women who’ve had a myocardio infarction (heart attack), than among those who have not. Heart attacks are considered an expression of estrogen deficiency. Obese women, who have higher circulating levels of estrogen, normally have a lower risk of cognitive impairment. In human trials, Hormone Replacement Therapy (HRT) has been associated with a 30% to 50% reduction in relative risk of AD.

The choice is clear. Prevention of AD with bio-identical hormones is a viable option in preventing this dreaded and untreatable disease.