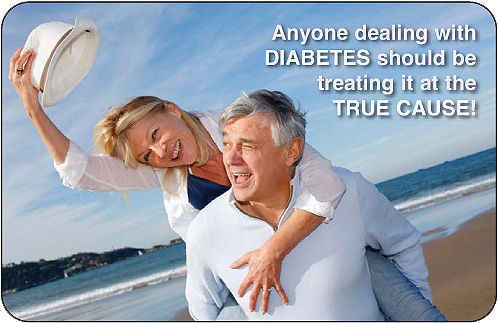 IS DIABETES CURABLE? Not if you listen to the American Diabetes Association (ADA). Here are three big myths/lies that the ADA propagates:

2) “Diabetes is a chronic, progressive and incurable disease.” WRONG AGAIN. Thousands of diabetics have been “cured” with a simple lap-band surgery, which works exactly the same as intermittent fasting—it’s just more expensive, more dangerous, plus it has side effects and other long-term problems—but it cures diabetes, just like intermittent fasting.

3) Lowering blood sugar is the primary goal of therapy. WRONG AGAIN! Diabetes is a dietary disease of insulin resistance. Remove the insulin resistance, and you are cured. Here’s the explanation…. How did we get to this place where “modern medicine” has got it so wrong? The goals of modern diabetes care are to manage people’s blood sugar at 140 mg/dl (out of fear of low blood sugar). This level is not low enough to where diabetes is curable (which is below 100), but it is high enough to guarantee that all the problems associated with elevated blood sugar will continue unabated.

But don’t you worry—your doctors will be quite pleased that you have met your blood-sugar goals. And they will continue to document and “manage” you, with all the eventual problems, right up to your death. Many of us are familiar with the eventual, catastrophic problems associated with advanced diabetes: eye retinopathy, heart disease, kidney nephropathy, peripheral neuropathy, vascular disease, depression, brain and cerebral circulation issues, erectile dysfunction, diabetic foot ulcers, and amputation. Yes, you can expect all this under the best of modern diabetes care!

Modern medicine didn’t always get this so wrong. From the beginning of time until the early 1950s, there weren’t that many diabetics around, but the approach to treatment was always a dietary one. Treatment manuals from the 1920s and before, from all over the world, totally exclude carbohydrates from the diet.

In 1916, the famous Joslin diabetes clinic was advocating a low-carbohydrate diet. Then in the 1950s, the lie/myth of fat-causing heart disease started and continues to this day; although, it has been proven to be totally incorrect. As fat became the enemy, our medical and dietary experts strongly discouraged it and removed it from our menus.

Fast forward to the 1980s. Nothing should have fat in it, but thousands of calories in those super-sized soft drinks were totally okay. Everything food-wise was (and still is) now super-high in calories and sugar, but is fat-free! Fast forward to the 1990s and to the present. We are a nation of diabetics; over 50% of us are obese; 84 million are prediabetic; 30 million are diabetic. That’s 100-million people slowly crashing in the USA alone!

How do we get out of this mess?

We are at nation flooded with diabetes and obesity due to the same cause—it’s all insulin. At present, we have a model of diabetic care that guarantees that no one will ever be cured, but will slowly get worse over time even with the best diabetic care. The solution lies in what we understood a century ago—diabetes is a dietary disease, and it is entirely curable!

Insulin is a fat-storage hormone. Every time you eat (those 8 times a day), insulin is put out to put sugar into cells. Once the cells are filled up, to keep the blood sugar normal, the body then has to take that excess sugar and store it in different places in the body: as fat, in the eyes, nerves, toes, and in the blood vessels themselves. This is to keep your blood sugar “normal.” Welcome to pre-diabetes!

Once those storage areas are all filled up, there is nowhere else for all that excess sugar to go, so it just rises in the blood. Congratulations—you are now diabetic! The solution is simply to stop telling our body to store sugar, so it keeps putting out insulin. How do we do that? There are three proven ways:

1) Lap-band surgery. It works well because you stop eating… We could put you in a jail cell or a concentration camp and achieve the same thing.

3) Intermittent fasting. It turns out that simply fasting is the key in all these diets. Again, this has been a highly beneficial curative since ancient times. Fasting involves reducing the hours of the day that insulin is spiked and doing its damage (usually by extending the time between supper and breakfast). When fasting, your body uses up the all sugars and carbs (glucose), and then it reaches for and burns your stored fat for its energy.

In the next issue, we will look more deeply into the treatment of diabetes through intermittent fasting and the low-carbohydrate diets. In preparation, I recommend that you review Dr. Jason Fung’s books and/or view his YouTube videos on fasting, diabetes and obesity.

Call Michael Lang, ND, ABHRT, for an appointment at (406) 586-1100. To learn more about services, visit TheVitalLife.net. His office is at 19 North 10th Avenue in Bozeman. On Facebook: thevitallife.